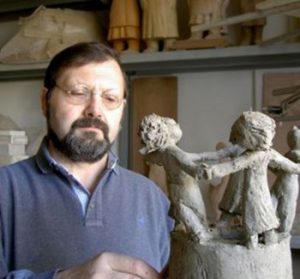 When he was very young he felt the necessity of confronting himself with the material.
He began to work wood and after terracotta and bronze.
He has been assiduously dedicated to sculpting since 1984 and has taken part in national and International exhibitions in Austria, France and Switzerland from 1987.
In 1992 he followed Waldermar Otto’s sculpting course at the summer Academy of Salzburg.
After the birth of his daughter, he created his famous “Bambini”.
En 1999, he was invited in Guatemala to realize a sculpture “Memoria” dedicated to the collectors of coffee in the city of San Marcos.
To qualify Fortuna’s work is “Poetry”, always present in the sculptures of children, alone or by groups.
His works are in numerous publics and privates collections in Italy and around the world.